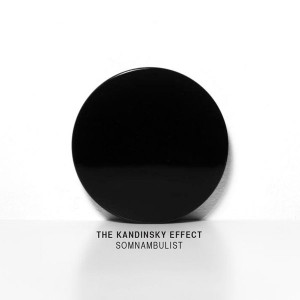 The Kandinsky Effect feel that this album is their most effectively conceived collection of music to date. “I feel like I had a clearer idea of what I was looking for in the sound of my compositions and how to approach writing for this group,” says bandleader Walker, ” it’s a sort of coming-of-age piece.”

For an album so full of fire, Somnambulist has some surprisingly leisurely origins. Much of the material was composed by Walker in Dominical, Costa Rica, during a lengthy stay in a beach-side shack. “I was there for a few months just writing music,” he recalls, “playing saxophone and surfing to see what would come out from me compositionally in a totally different, non-city environment.”

As it turns out, though, there was a fair amount of psychic friction to be found in the aforementioned seemingly bucolic environment during Walker’s time there. “‘Tagzhout'” was written in Tagzhout, a small fishing/surfing village in Morocco,” explains Walker. “It was written on the day of Eid, a religious holiday where everyone slaughters a goat in the street. To me the whole experience was very dark, and there was blood everywhere on the streets. On the days leading up to it people are driving with live goats tied to their roof…witnessing these things may have shaped this tune a little.”

But that tune, with Walker’s bobbing and weaving sax riding the roiling rhythms of Petrina and Dolister, isn’t the only one with a dark backstory. And Walker’s compositions aren’t the only ones on Somnambulist born in exotic locales. Petrina’s tunes were written in San Remo, Italy and Tulum, Mexico, while the origin for one of Dolister’s works, “Annabelle Chases a Bug,” can be traced to memories of a cat in Nashville, Tennessee. Another Dolister tune, “Sad Fly” has its origins as one of the accompaniments to a decidedly quirky animated film named Spacefish, which the drummer describes thusly: “In the animation, ‘Sad Flies’ are a swarm of tiny insects that play sad music to trick unsuspecting travelers, slowly leading them into a massive suicidal depression so that they can feed on their eventual corpses.” Don’t be too afraid though, Dolister says, “the version Kandinsky Effect plays is nowhere near as dark, but much more about developing a feeling of apprehension.”

Over the years, the group has traveled extensively to perform with multiple trips and tours to Europe, Asia, and North America, perfecting what Dolister calls their “intellectual groove instrumental music.” And from the slip-sliding beats and slithering sax lines of opening track “Copalchi Distress Signal” to the insistent pulse and layered, lyrical melodies of closing cut “Muji,” there’s a feeling of the refinement process reaching fruition on Somnambulist.

“Somnambulist is definitely a step forward when it comes to composition and execution,” assesses Dolister. “The album documents the growth and identity of the band over the last several years… that’s displayed the most in the compositions. This is the band’s first record in which all of the songs were composed or arranged with the intention of being on this record. …we coordinated the writing to decide whether each composition would compliment or contrast another, or create a certain reaction, or use a specific theme. …this gives the album a much stronger listening experience from start to finish. We learned a lot from making our previous album, Synesthesia…With Somnambulist, we had a much clearer idea of how to approach the recording process. In general, Somnambulist is a much more cohesive statement.”

for more information about the Kandinsky Effect:

the kandinsky effect would like to sincerely thank everyone that helped us make this record; without your support this would not have been possible. we also want to especially thank merri & gary, samantha, maria, michaela, and joe for their generous contributions.